In that Empire, the Art of Cartography attained such Perfection that the map of a single Province occupied the entirety of a City, and the map of the Empire, the entirety of a Province. In time, those Unconscionable Maps no longer satisfied, and the Cartographers Guilds struck a Map of the Empire whose size was that of the Empire, and which coincided point for point with it. The following Generations, who were not so fond of the Study of Cartography as their Forebears had been, saw that that vast Map was Useless, and not without some Pitilessness was it, that they delivered it up to the Inclemencies of Sun and Winters. In the Deserts of the West, still today, there are Tattered Ruins of that Map, inhabited by Animals and Beggars; in all the Land there is no other Relic of the Disciplines of Geography.

For this exhibition Victoria Ahrens looks at the notion of contemporary cartography as a metaphor for the constructed and imagined landscape. Where the stars and the compass once served as our guide through terra incognita (parts unknown), layers of data collected from satellite imagery now map our every corner of the earth. These composite images often prolong cartographic anomalies, or paper towns, added to maps in the 19th century in order to guard cartographic copyright. When these are found and eliminated from the map, ghost imprints of images are left in the data. Here, Ahrens looks at this notion of ‘unmapping’, as projections and photographic prints reconstruct personal ethnographies of places she has encountered, places that are meaningful historically, and cartographically to her. The nature of these fragmentary topographies means it is impossible to grasp the landscape in a single view, to map it in its entirety. Like the stories we tell of places unknown, narratives are folded into the creases- like ‘maps’ – they accumulate data, fold time, and create mosaics of places that perhaps never existed, except in her imagining. Like Borges’ tattered ruins, these are relics or memories of encounters with Parts Unknown. Grounded in truth, they do not however, hold true, as the images take cartographic processes back to their hand made and printed roots, working as entropic records of our existence and referencing the ways we have found to guide ourselves through the landscape.

Close Encounters (2020) Two photo etching prints, marks from in situ exposure and development- ink mixed with earth from the Altiplano

The two photographs of the Altiplano and its salt lakes come together to create an otherwordly and haunting image of the volcano- the marks on the print indicate and point to the space of their making in situ- exposed and developed in the landscapes of the Altiplano, the piece overlaps, touching, and reminding the viewer of the touch of the plate to the landscape itself.

video installation: Ground Truth (2020) Layered digital print on copy paper, folded, projection on loop (melting glaciars). The two extremes of the country (Argentina) where on is moving on tectonic plates, and the other is melting and fragmenting. in this way the map is never static or fixed but has moving edges. The piece looks at the errors, lacunae in the official maps, referencing the historical cartographic copyright traps added and sustained in contemporary maps that are now being identified with digital technology. We are now unmapping the map. 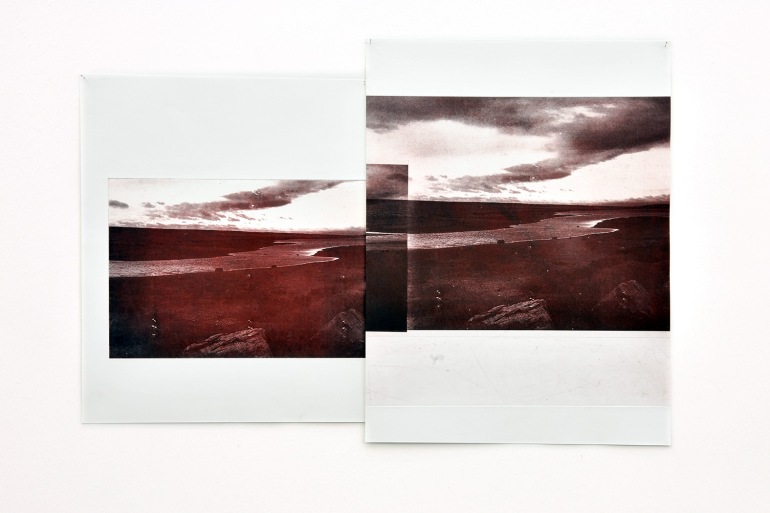 Parts Unkown, lacunae (2020) Dorset coastlines, in an overlapping piece that interrupts the continuity of the landscape- where the margins and liminal areas overlap, they create a lacuna or moment of pause in the image. This reimagines the space in the colours of the earth, mixing this in the inking up processes to leave the dna or fragments of the actuality of the place on the surface of each print 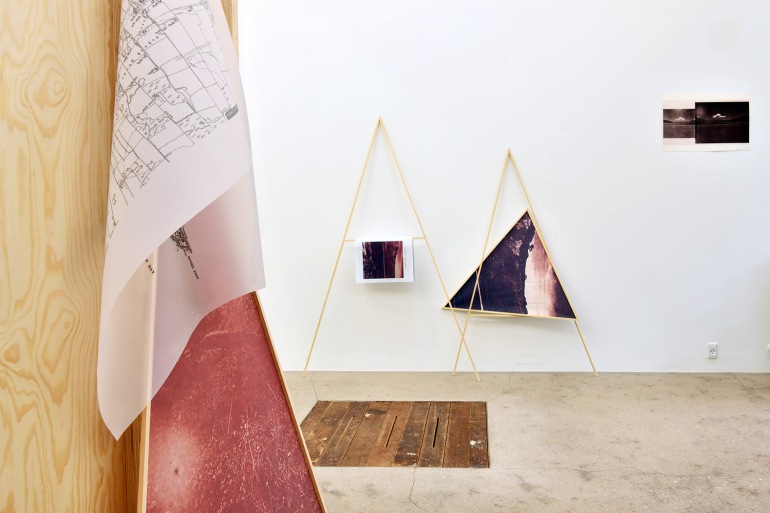 Triangular wooden supports reference the earliest contours of basic mountain mapping and drawings, but also speak to the Scheimflug principle, where a triangular perspective is practiced by aerial photographers- photographing the landscape from the air requires a complex mathematical calculation of angles in order to flatten the image. 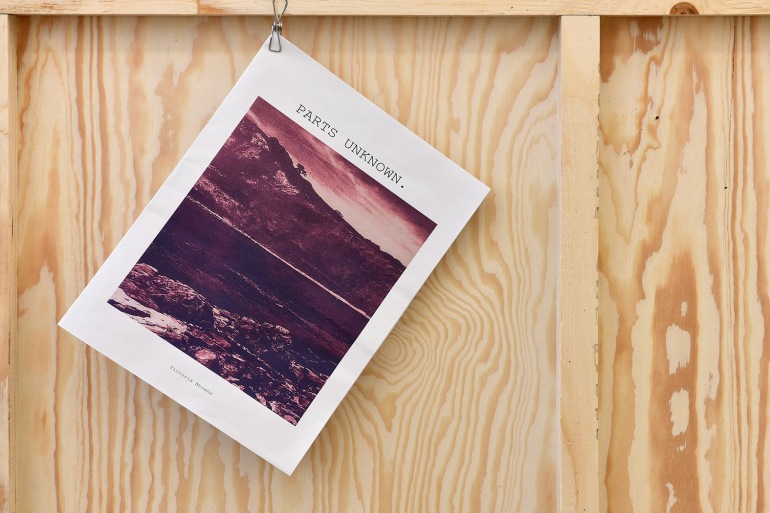