________________________________A series of photo etchings, folded and turned into stand alone sculptural pieces- exploring the fragmentation and erosion of our coasts, and their significance as places where land and sea jostle for authority. These are places on the edges of maps, where maps would have begun, as early cartographers traces the shape of their coastline from the sea and land. In the anthropocene, these rock strata and geological formations hold the promise of our historical, geological, political and paleontological origins, while each fragment, as it disintegrates, carries that memory away with it, forgotten over time. As the coast lines and bodies of water, mountanous regions, erode and recede from the sea, new maps are needed where new contested terrritories appear. These composite images, adhere to a sense of photographic truth, yet like the edges of maps, they expose places at the margins of memory, of our origins, borderlands or spaces that denote belonging. Exposed and developed in the landscape itself, however, the plates are imbued with a sense of place, as collected earth and rock fragments mixed in with the printing inks, create an actual map of the place, a dna imprint on their surface. This material presence belies the disappearance and nostalgic memories that these reference, as places of my childhood imagining. 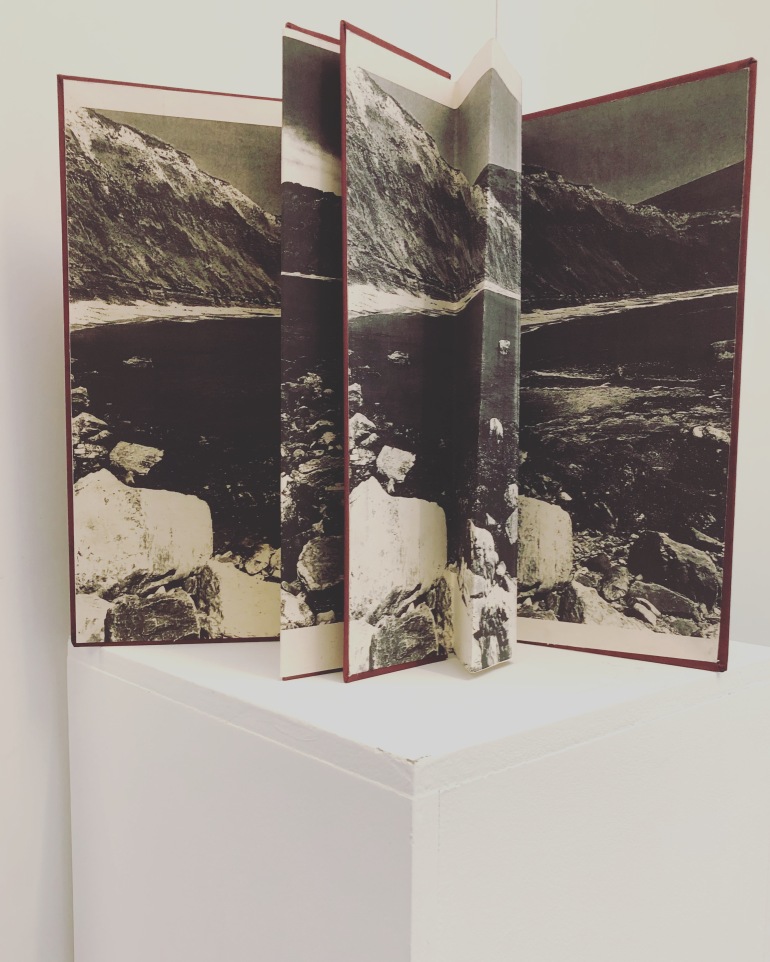 This piece centres on notions of erosion and uncertainty. They are photo etchings I created in situ on the Jurassic coast of the UK and in Latin America on the altiplano of Peru and Argentina, where the oldest fossils have been found, and the coast line crumbles inexorably into the sea. It continues my investigation into landscapes of disappearance, places where myth, history and memory collide. Creating this piece by exposing and developing the photographic plates on site, I explore the notion of the auratic translation of the image, in which each print in the edition is imbued with the markers of the place itself. They can be seen as three individual portable photographic sculptures or books,or, as they are shown here, as a fragmented panoramic piece that works as a single installation_________________________________________________________

An intriguing contemporary art exhibition connected to the theme of False Memory. A false memory is the recollection of something that did not happen or happened differently from the actual event. Constructing memories, rather than documenting them, this group exhibition will explore the production of fabricated, distorted, or misinterpreted memories and includes Extramission 2 (The Trilogy) by Lindsay Seers which became part of the Rugby Collection in 2011.

A false memory is the recollection of something that did not happen or happened differently from the actual events, without consciously intending to deceive. The exhibition seeks to challenge our perception of being able to accurately remember moments from the past and considers the relative ease of creating false memories.

This exhibition will coincide with the display of Lindsay Seers’ Extramission 2 (The Trilogy) that became part of the Rugby Collection in 2011. Seemingly autobiographical yet incoherent, it tells the story of Seers’ upbringing on the island of Mauritius and addresses the artist’s early speechlessness; development of a photographic memory and eventual loss of this ability when she began to talk. Constructing memories, rather than documenting them, Seers poses the questions: Is the camera a tool for documenting and recording, or for creating? Is truth something that can be told or is it experienced? To these questions there is no convincing resolution.

This group exhibition will explore the production of fabricated, distorted, or misinterpreted memories and we would like to invite artists to submit artworks that link with the theme in whatever way inspires them. This could include Imagined experience against lived experienced, Gist memory, walking memory, nostalgia or any other memory-based phenomena that are linked to the construction and discussion of false memory. Works can be both literal and/or symbolic or can be directly inspired by the themes in Lindsay Seers’ artwork.